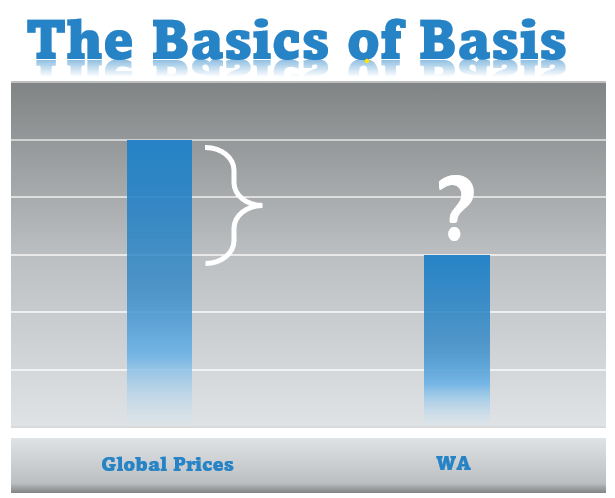 The Basics of Basis

If there is one aspect of agricultural commodity pricing that causes more confusion than any other, it’s basis. The first reason for this is that, as bright-eyed and rosy-cheeked kids attending primary school, we learned that the word ‘basis’ meant an underlying fact, principle or argument. But later on, as we set foot into our agricultural careers, we learned that it also means the difference between two prices – the ‘market’ price and the local price. It is in essence a word that is used as a wildcard. To really understand this, we need to unpack the fundamental principles of pricing.

A ‘price’ should be registered at the meeting point of a seller and a buyer. When there is agreement to transact, that forms a price. A later transaction sets a new price and on it goes. That’s not necessarily typical though. For example, grain prices in WA often reference the top trader’s bid price on that day. No grower may have transacted any grain at that price and the marketer may pull the price at any time. Instead, we hear whispers of the trades done outside the published price and selective bias means that, depending on whether you are a buyer or seller, the ‘price’ of the day may vary by $20pt. This draws our attention to a couple of things very useful in understanding price and that is liquidity and transparency.

Liquidity means that whenever there is a seller, there is a realistic buyer and vice versa.  So, when John, 20kms out of Bullfinch, hangs a sign on his gate advertising one tonne of lupin pick-up from farm, he will find that the ‘farm fence market’ is not very liquid.  However, if by chance, Bob from down the road drives by, spots the sign and wants one tonne for seed next year, then the market instantaneously becomes liquid, though only if Bob is prepared to meet John’s price. After Bob, there may not be another potential buyer for that one tonne until next season when Bob drives back down that road. This scenario indicates there is no depth to the market. The farm fence market is about as liquid as a block of jarrah.

A transparent market means that those not involved in the transaction know the price set for that transaction. Practically, no one will know the price Bob and John from Bullfinch transact for that tonne of lupin. It could have been 5 cartons of beer, an old ram or a 100th of a bitcoin. In most cases, the vast bulk of agricultural transactions are not transparent, for varying reasons.

Both transparency and liquidity are why financial markets and exchanges are critical to understanding global commodity pricing. Exchanges such as the Chicago Board of Trade (CBOT) are both liquid and transparent. Both buyers and sellers can see each others’ positions and there are plenty of participants offering more depth than a bore in China. But (and like Sir Mix-a-Lot’s partner, it’s a big but) futures contracts are rarely physically delivered and those that are, are delivered in specific US territories.  This is the first of the many confounding factors that drive basis. For a tonne of wheat grown in WA to be compared to a tonne of wheat in Illinois means that variables such as freight, handling, storage, quality, tariffs, biosecurity constraints, as well as supply and demand factors impacting a particular area, need to be reconciled… and we start entering an entire orchard’s worth of apples and oranges.

We are seeing this very clearly right now in Australia in two markets:, grain in WA and cattle in the East, both underpinned by ample spring rain across Australia. With respect to grain, there are so many tonnes sitting in paddocks and receival bins across WA that the supply chain is choked. Although global prices are high, there is no way to get any more grain offshore than already committed - whether it’s bulk or container – and nobody wants to buy an asset, stranded until at least the second half of 2022, at today’s prices. Accordingly, basis for grain is heavily negative (which raises the philosophical question, if the global wheat price rises and there is no way to export grain, does it really rise?).  On the cattle side, eastern states re-stockers are valuing the yield potential from free feed rampantly growing in paddocks more than value of beef in an offshore market today – resulting in record EYCI levels and a strong positive basis.

Despite the contrasting scenarios, in both cases the difference in global prices to local prices is explained by the overly simple word ‘basis’ – which isn’t really an explanation at all. A better explanation would be ‘supply chain limitation discount’ and ‘re-stocker premium’ respectively.